The First President of the Supreme Court of Poland prof. Małgorzata Gersdorf demands Polish authorities to stop smear campaign against judges and to abstain from using hatred towards them as a weapon in the struggle for power. She also calls upon the government and parliament to exercise restraint [full statement in English]

The First President of the Supreme Court responded to a draft bill submitted by a group of MPs, that in her words „can only be described in one way: the elimination of the independent judicial authority.”

Prof. Małgorzata Gersdorf summarized that the bill „contains everything: a ban on judges benefiting from freedom of speech, the establishment of an invigilation mechanism and a drastic reduction in their right to have profiles in social networks, the presentation of a list of disciplinary offences, which were dressed in the most vague wording possible and an attempt to end the validity of acts of judicial appointment by statute – after all, this is a prerogative of the president and not a right of the Sejm. However, first of all, it contains a prohibition to apply the law.”

We publish her statement in full.

Night-time attack on the independence of the courts in Poland

Declaration of the First President of the Supreme Court

A sad and symbolic date, one of the milestones in our collective memories: the 38th anniversary of the introduction of martial law, passed just a few days ago.

It is not my intention to make a holistic assessment of martial law at this point. I would like to draw attention to just one aspect that strictly applies to the law: this was not only an obvious breach of the Constitution of the People’s Republic of Poland (which, unfortunately, in the absence of a constitutional court, was impossible to examine objectively), but worse, its introduction was contrary to the elementary principles of the law of civilised states. These include the requirement to duly enact and publish acts of law, the lack of non-retroactivity (non-retroaction) and, finally, the universal right of all people to a fair and public consideration of their case by a competent, independent and impartial court, which has been formed by statute. These rights were formally known in the so-called People’s Poland and were applicable in the legal system. After all, in 1977, the authorities of the People’s Republic of Poland ratified the UN International Covenant on Civil and Political Rights, agreeing to guarantee it.

However, I would like to reiterate that martial law created a dilemma for judges as to what to do. Should they succumb to a law that is seemingly such, even though it breaches higher standards? Should they go against natural law, against their own conscience and justice?

Only a handful of opportunists had no dilemmas – they put themselves to shame; their names are well known today.[1] Today, we consider the few who openly opposed the conduct of the communist authorities, refusing to breach human and fundamental rights, to be true heroes. And the price of their courage was high – intimidation by the party and the security services, ostracism, transfer between divisions, the risk of dismissal from office by the State Council and frequently also the application of disciplinary proceedings.

38 years have passed. And it was precisely on 13 December 2019, that the public was informed about the submission of a bill by a group of MPs, which can only be described in one way: the elimination of the independent judicial authority. Sejm form no. 69 of the Sejm of the ninth term contains a dignified continuation of the lawlessness of the 1980s. It contains everything: a ban on judges benefiting from freedom of speech, the establishment of an invigilation mechanism and a drastic reduction in their right to have profiles in social networks, the presentation of a list of disciplinary offences, which were dressed in the most vague wording possible and an attempt to end the validity of acts of judicial appointment by statute – after all, this is a prerogative of the president and not a right of the Sejm. However, first of all, it contains a prohibition to apply the law. Yes indeed. Because how else is it possible to refer to a situation in which the courts are restricted in the sphere of cognition, prohibiting them from analysing – to the detriment of the citizens – whether, in the light of the law, the powers of the authorities are being respected. The breach of the applicable Constitution, especially Articles 2, 9, 10 and 91 para. 3 are more than obvious here, although – as can be seen – not to everyone.

One thing should be reiterated in order to explain why this is about a law that poses a threat to us all, regardless of our worldview and beliefs: there are no free citizens without independent courts and impartial judges. There is also no fair, democratic state without a reliable parliamentary debate. It is not the judges who are destroying and anarchising the Polish State. It is the political power that is responsible for the destruction of the Constitutional Tribunal. It also undertook to conduct the so-called ‘reform’ of the Supreme Court in an attempt to remove its judges and governing bodies, in breach of the Constitution and international law and, when it failed – decided to fight with this institution using the ‘little steps’ method. The honourable name of a judge has been defiled by the words of a former prosecutor and member of the Polish United Workers’ Party about the ‘subservient mentality’ of judges which is desired by the authorities. Nothing is as it seems any longer: the Constitutional Tribunal is not a Constitutional Tribunal, the National Council of the Judiciary is not a National Council of the Judiciary, and shortly also the courts may not be courts, but purely a silent extension of the will of the executive.

Lies repeated many times do not become the truth. We do not and do not want to live as free citizens of a proud Republic of Poland in an authoritarian state. We rejected this in 1981 and we disagree with it in 2019. Poland is a Member State of the European Union, where high requirements are set for the authorities; in which any court can ask a question of the Court of Justice of the European Union, because this arises directly from Article 267 of the Treaty on the Functioning of the European Union – a Treaty that is today embodied in the Treaty of Lisbon, which was accepted by the Nation in a referendum and to the amendment of which the late President of the Republic of Poland, Lech Kaczyński, was instrumental. In such a state, judges, who are allowed not only to have views on social life, but are even allowed to express them in public – this is an international standard that is binding on Poland – cannot be silenced.[2] Judges, obviously, exercise this right in a dignified and balanced way, and will take advantage of this because they are citizens and people.

I would also like to remind all Members of Parliament and Senators of the Republic of Poland that CJEU judgments are binding not only in one case, but can be applied in the same way in every subsequent case in which the same problem arises.[3] Polish and European law are flowing in the same stream; for us, Polish and European judges, because that is what we are, there is no conflict between the Constitution and the Treaty. The courts cannot be muzzled by judgments of the Constitutional Tribunal, which will limit the institution of questions referred for a preliminary ruling, because its decisions can never close the door to the Court of Justice for the courts of the Member States.[4] Such a solution will lead directly to Poland’s exit from the European Union. Therefore, there will be no consent for the interpretation of the Constitution, statutes and treaties that judges are allowed to apply to be forged in the privacy of party offices. This will not be changed by any law. This is not a matter that can be negotiated in any way. I believe that, just as the court of history has admitted that the people of Solidarity called ‘brawlers’ and ‘troublemakers’ were right, it will admit the same tomorrow that those who judge on behalf of the Republic of Poland were right.

I would therefore ask that the hatred of judges and courts stops being used as a weapon in the struggle for power, especially since repression, as in 1981, would be a sad expression of powerlessness rather than a manifestation of strength. I call upon the government and parliament to exercise restraint and honestly discuss how to put the state of affairs, which has arisen through the fault of these authorities, right for the common good. I would ask that a real discussion is started on repairing the justice system in Poland. I finally appeal for the campaign of abusing and ridiculing those who have dedicated their lives and efforts to the service of the Republic of Poland – judges of the ordinary, administrative and military courts and the Supreme Court – to end.

Our independent country, and not the victory of one party or another in the next elections, is the highest good.

The statement in Polish 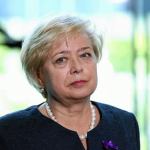